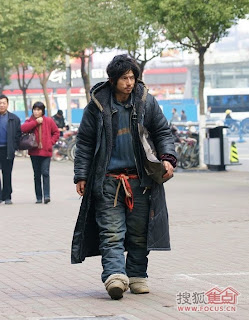 We all know "homeless chic" has been touching every corner of the fashion world for the past few years, but it is now more evident than ever that designers are actually turning to the streets and its inhabitants for inspiration! Ningbo's most famous homeless person, now dubbed Brother Sharp, has been taking over the cyberworld with his sometimes outlandish but always trendy boho style. His fondness for women's clothing actually even seems to fuel this overnight fashion sensation's status as "the coolest man in China." The most outrageous thing we've seen and read about this 5'8" 35 year old "Homeless Vagabond" is the striking similarities of one of his looks to a model in D&G's FW10 runway show. Brother Sharp's good looks have also been compared to the likes of Takeshi Kaneshiro and Ken Watanabe. So, what is the deal with this stylin' street walker? 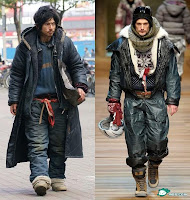 Rumors are rampant about Brother Sharp's true identity and what led him to his current state of "great fog sickness", which mainly consists of a loss of identity, and pretty much a feeling of permanent lethargy. Some say he became this way after his girlfriend left him, and all he wants is a woman who will love him. But when well-intentioned semaritans sought him out to offer their help in giving him a place to stay or to help him find work, he would only respond by crying. Brother Sharp was recently reunited with his family (after he became an internet sensation), and was brought to a mental institution as it is said that he looked mentally disturbed when approached on the street. He had been estranged from his family for about the past 10 years. Brother Sharp says that he enjoys the freedom of the streets and does not wish to return home. A blogger named Tianyi123 had probably the most real encounter with Brother Sharp that anyone has been able to have about 2 years ago, when she spent six months experiencing and documenting the life of a homeless person in China. In her recollection of her days with Brother Sharp, Tianyi123 talks about offering him 10 yuan to buy food only to see him go to the nearest store to buy cigarettes with the money, and watching with the heaviest of hearts as he eats discarded remnants of someone's lunch off the sidewalk. Because of his "great fog sickness," Brother Sharp does not know how to beg. Technically he is not a beggar at all, just a street wanderer or what Westerners may call a gypsy. Begging is actually illegal in China, as the communist-run state claims that they provide all necessities that a citizen would need. Public opinion on the level of truth behind this claim......varies, to say the least. 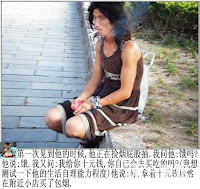 Tianyi123 also uncovers the mystery behind Brother Sharp's fondness of women's clothing, reporting that he yearns for the love and care of a woman and a home. "Sometimes he is himself, and sometimes he pretends to be the woman that loves him." Click here for her full report

With all this new attention on the homeless people in China, and the actuality of China's aid for the homeless being called into question, I hope China's people will now think twice before dismissing the homeless as lazy and con-artists (even though there are a lot of those out there too..where can we draw the line?) and perhaps even lend a hand.

Good luck Brother Sharp, we hope you find what you are looking for! Take care, the world is watching now...
Posted by AddictionHK at 22:05

Spring collections are in!